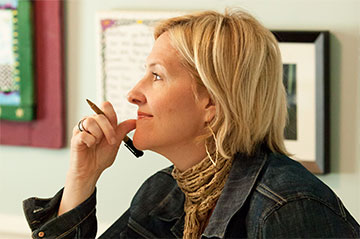 On September 24, 2015, Thad's hosted Dr. Brené Brown at the Broad Stage in Santa Monica. Her latest book, Rising Strong was released in August 2015.

Dr. Brené Brown is a research professor at the University of Houston Graduate College of Social Work. She has spent the past thirteen years studying vulnerability, courage, worthiness, and shame. Brené is the author of two #1 New York Times bestsellers: Daring Greatly and The Gifts of Imperfection. Her latest book, Rising Strong was released on August 25, 2015. In Rising Strong, Brené writes, “If we are brave enough, often enough, we will fall. This is a book about what it takes to get back up.”

She is also the Founder and CEO for The Daring Way™ - an organization that brings her work on vulnerability, courage, shame and worthiness to organizations, schools, communities, and families. Brené’s 2010 TEDx Houston talk, The Power of Vulnerability, is one of the top five most viewed TED talks in the world, with over 19 million viewers. Brené lives in Houston with her husband, Steve, and their two children, Ellen and Charlie.


UPDATE: What a wonderful evening! Thanks to all who were able to attend. For both those in attendance and those who could not make it, please go to brenebrown.com for more of Brené's work and future events!

YOUR SEAT ON SUNDAYS

All other Sundays: meet @ 10a either in person (outdoors) @ The Willows OR on Zoom

Youth & Kids: meet on Saturday @ 10a on 1st Sundays (email for the separate link), or in person @ 10a on other Sundays

*all times are PT, but we'd love to welcome you from any time zone!

Send Us a Message

Thank you for contacting us!